Was there a fictitious payment bearing Karimanski’s signature: What the forensic report reveal

Did Lyubomir Karimanski, candidate for governor of the Bulgarian National Bank (BNB), commit legal violations in the case concerning the withdrawal of BGN 1 million by a newly registered manager of a company to which Investbank owed money? This question is worth a little over a million levs on paper, but in reality the zeros are many more, as the BNB is the institution that controls the entire financial system of the Republic of Bulgaria. Consequently, the head of this institution is required to possess an impeccable professional reputation.

This is precisely why we decided to analyze and publish an important non-public document — a copy of the forensic accounting and banking expert analysis commissioned on pre-trial proceedings no. 419/2015 in the register of the Investigation Department – Sofia City Prosecutor’s Office, initiated in connection with the abovementioned circumstances. Here are the established facts, with the focus placed on the actions of Lyubomir Karimanski as one of the bank’s two executive directors:

The background: DIG-94 EOOD and Investbank were in a long-standing legal dispute over an unsecured bank guarantee, followed by blocked company accounts and court battles. The dispute dated back to the time before Karimanski became executive director of Investbank (according to the bank, the former executive director was dismissed and convicted). In 2015, the court saga ended with a judgment in favor of DIG-94, which entered into force, but the bank refused to comply with it. The “denouement” took place on 13 August 2015. On that day, a new manager was registered in DIG-94 EOOD’s file on the Companies Register — Vasil Kolev, who eventually became more famous as “Vasko from Moderno Predgradie.” The newspaper Capital and the online edition e-vestnik dedicated articles to this individual in 2015, in which he was portrayed as an impecunious and poorly educated citizen. In the well-known “company theft” criminal schemes, such individuals are typically paid insignificant amounts of money to become scapegoats and shield the real perpetrators. Usually, with the use of false documentation, they get registered as managers of companies with huge assets, and then swiftly dispose of company property or debt claims of considerable value. In the present case, Vasil Kolev signed an agreement with the bank’s executive directors, who acknowledged the debt obligation and, at least on paper, gave Kolev the owed amount of money in cash that same day, settling the dispute in full. However, this entire scheme is more than questionable to the impartial observer.

The forensic accounting and banking expert analysis performed in the course of the stated pre-trial proceedings is founded upon Investbank’s internal documentation, collected by the investigators, and identifies several groups of violations, omissions and discrepancies, such as:

– payment transfer without the approval of the bank’s supervisor;

– missing documentary evidence to show that the bank branch was in fact holding such a large amount of money in cash.

The expert analysis strives to provide responses to seven specific questions of the investigators, five of which aim to directly or indirectly affirm or dispel doubts regarding the legality of the financial transactions. The overall impression is that the doubts were not dispelled, and were even reinforced in some aspects, such as in relation to the missing documentation identifying the cash availability in the respective bank branch.

The findings and conclusions of the expert analysis can be summarized as follows:

On 13 August 2015, at 17:01h, the amount of BGN 1,193,322.72 was credited to a newly opened account of DIG-94 EOOD at Investbank. At 17:10h, Vasil Kolev, who was registered as the new manager of the company on that same day, withdrew BGN 1,183,000 in cash from the bank counter. It was recorded that this instant withdrawal, requested and executed within the same day, cost Kolev over BGN 7,000 in bank fees. There is no information about the precise time when the bank account was opened, but the document from the Companies Register appended by the bank official shows 13:33h.

The reference for the payment reads “Under the agreement dated 13 August 2015.” By means of the cited agreement, Investbank undertook to pay DIG-94 EOOD the amount due on the basis enforceable court judgments, which the bank had refused to honor up to that moment. It is inexplicable why the bank suddenly decided to settle the debt with the newly registered manager. Among the appended documents are also minutes of a meeting of the Board of Directors of Investbank AD, held on the same day when the agreement was approved. “There is no legal statement or any similar document from the bank’s legal department among the appended documents, on the basis of which the decision could have been taken. There is no decision of the Supervisory Board of Investbank AD confirming the decision of the Board of Directors” (p. 19). It should be noted that the Board of Directors itself explicitly stated that such confirmation was required in view of the importance of the case.

However, Investbank claims that neither the Board of Directors, nor the Supervisory Board has ever held a meeting on that issue. The question surrounding the authority to enter into such an agreement is not of minor significance, as according to the expert analysis, the signatures of the two directors exist on the payment order issued by the bank. Therefore, if the directors violated another decision of the Board, they may be held accountable for their actions. You can see the complete answers to our questions to the bank here.

The agreement dated 13 August 2015 was signed by Investbank’s two executive directors and by Vasil Kolev, and all the signatures were notarized by the assistant of notary public Ivcheva, outside of her notary office. On the following day, 14 August 2015, at 09:38h, Vasil Kolev closed his account and withdrew the remaining BGN 1719.24 in cash at cashier’s desk No. 2 in the Central Lounge.

Here are some of the additional findings of the expert witness based on a thorough review of the documentation related to DIG-94 EOOD’s account:

“The documents that had to be filled in by DIG-94 EOOD’s representative indicate a different handwriting than the one associated with Vasil Kolev’s signature on the agreement.”

“On the appended copy of the agreement … every page contains the signatures of the persons who signed the agreement. The bank’s practice when drafting documents for contractual relations is … the copy of the bank should contain signatures of the persons who drafted and verified it, respectively (usually on the last page of the document).” The expert analysis establishes that such signatures are missing from the provided copy, i.e., it is not clear who drafted the document. 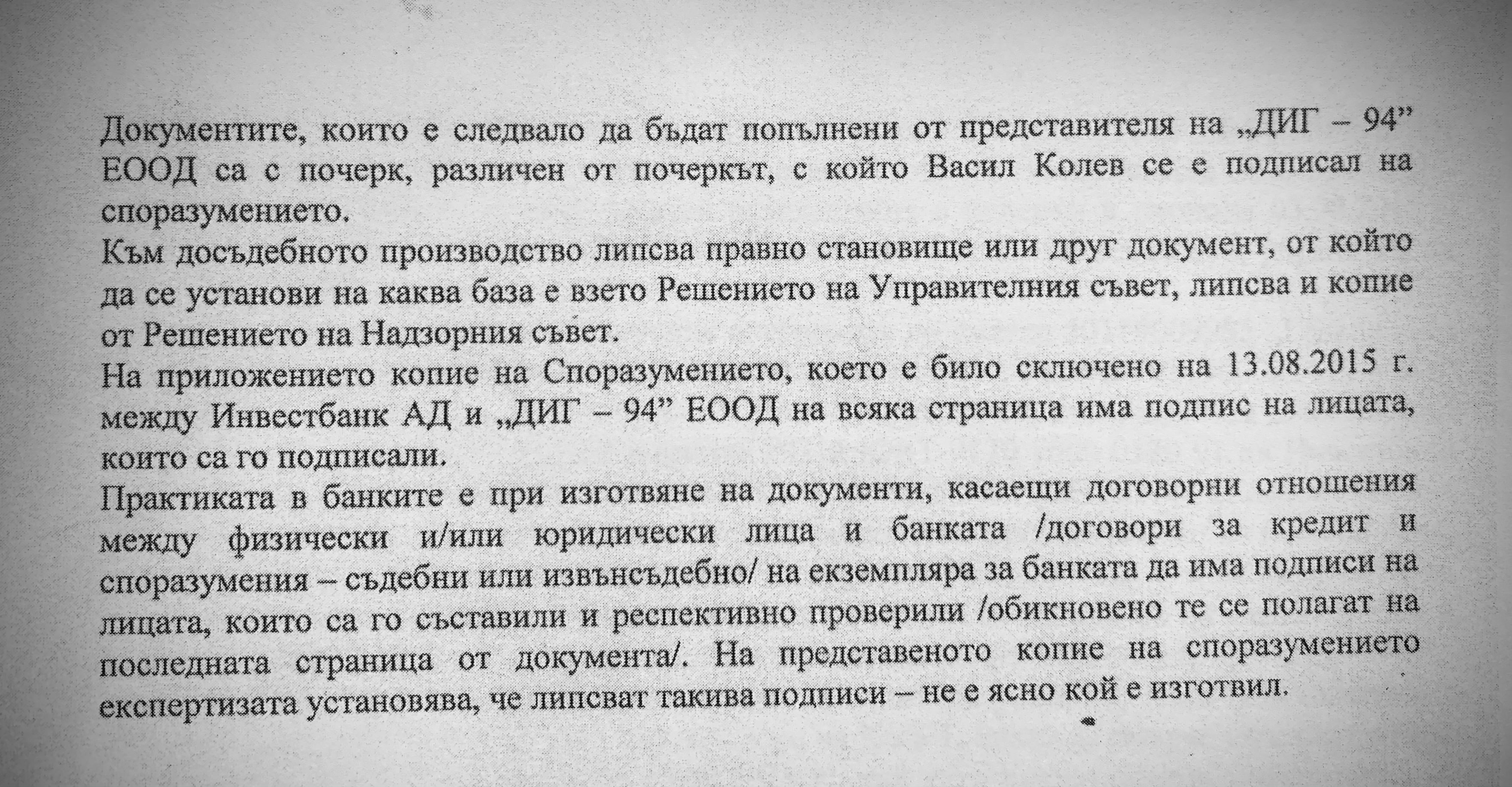 The expert analysis devotes the greatest attention to the question of whether on 13 August 2015 the respective branch of Investbank had sufficient funds to cover the recorded withdrawal (evidently, in order to verify the fictitious cash payment hypothesis). There is a considerable number of discrepancies and omissions in the bank’s internal accounting system in this regard, and the expert witness has firmly concluded that “the provided documentation does not help ascertain whether the amount of BGN 1,183,000 was in fact present in Cash Desk 1 … as the provided documentation is incomplete — there is no information about the initial balances in the accounts and the appended transcripts do not contain all the performed operations.”

Discrepancies were also identified in the documentation related to the transportation of cash in valuable shipments — preparation orders for valuable shipments no. 2986 and no. 2087, issued the same day. One of the orders is missing the necessary signatures, while the other one was not provided at all.

The task of the expert analysis conducted for the purposes of the investigation is to give answers to specific questions, whereas the existence of a crime and the identity of the respective perpetrator have to be ascertained by the prosecutor in charge. So far the Prosecutor’s Office has not made an official statement about the pre-trial proceedings and has not shared information about its development from 2015 to date.

The full text of the document, with redacted names of the expert witness, the bank officials and the investigator who commissioned the report, can be accessed here.