Days before a state of emergency was declared in the country, the Bulgarian Food Safety Agency (BFSA) took another decision to pay millions for animal waste disposal to a company with questionable ability to perform the commissioned service.

The contractual relations between BFSA and Eko BG SJP, as well as another private company, Sin Krast 2016, were the subject of a joint investigation by the Anti-Corruption Fund Foundation (ACF) and journalist Genka Shikerova, published in August 2019. The investigation raised the alarm about several issues:

– Violations of the Public Procurement Act, mainly related to the signing of many annexes to the original contracts and the placing of orders for additional animal waste disposal services with the same companies in violation of the legal requirements; the illegal practice of reducing the contract guarantees of the hired providers; overlapping of contracts which means the companies have been paid twice for the same service, provided on the same territories.

– Large discrepancies between the processing capacities of the two companies and the amounts of animal waste that have been declared as handled in order to justify the payments made under the contracts from 1 March 2018 to date.

– Serious risks for public health, the farming sector and the environment.
Back in August 2019, ACF filed a report about this case with the Public Financial Inspection Agency (PFIA). We were informed that an audit would be initiated as a result of our report, as well as following instructions by the Specialized Prosecution Office.

The annex signed in March 2020 means that Eko BG SJP will receive additional funding for this year. It appears that the sum of BGN 8.76 mln., allocated with the contract from 1 April 2019 for services during 2019 and until the end of 2020, has already been exhausted. The question remains how a company with one mobile installation with capacity of eight tons of waste per day could have processed more than 19 tons per day – the average needed to justify the sum paid to Eko BG SJP by the state.

“The above-mentioned violations are nothing new,” said Boyko Stankushev, director of ACF. “It is obvious that despite our report and actions and despite recent managerial changes, the BFSA still continues to engage in the same questionable practices which benefit the same private companies.”

“While we were waiting for the results of the audit by PFIA, initiated as a result of our report and requested by the Specialized Prosecution Office, we managed to obtain and analyze official information about the payments made to Eko BG SJP and Sin Krast 2016 for the period March 2018 – March 2019,” said Mr. Stankushev.

The information was received after court proceedings and a decision in ACF’s favor by the Administrative Court Sofia since BFSA initially refused to comply with a request for access to public information, filed by ACF.
“The information that we received with the help of the court confirmed the serious concerns listed in our report from 2019 regarding the veracity of the information filed with BFSA which, in turn, justified the millions paid to the two private companies,” said Mr. Stankushev. “We are concerned that these questionable practices seem to be continuing in 2020, too.”

Between March 2018 and March 2019, the government has paid a little over BGN 20 mln. to the two companies for animal waste disposal services. According to the data supplied by BFSA, the two companies have declared that a total of 14,368 tons were processed over the period. Eko BG SJP have declared handling 5,942 tons of animal waste, while Sin Krast 2016 – 8,426 tons.

Eko BG SJP seem to have been busiest in March 2019 when it supposedly burned 659 tons, or an average of nearly 33 tons per day. However, according to documents supplied within the public procurement procedure, the company owns one mobile installation with capacity of eight tons per day. 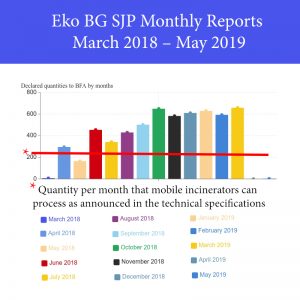 For Sin Krast 2016 the busiest time was June 2018. The company burned on average 1,337 tons per month, averaging 63.7 tons per day. Owned by Yanka Lazarova and Borislav Lazarov, the company only has two mobile incinerators with a joint capacity of 16 tons per day. According to media publications, Boris Lazarov was formerly managing director of Volf-96, as well as managing director of another company, Novera, which became notorious more than a decade ago after controversy over waste collection in Sofia.

ACF strongly doubts whether the amounts of animal waste declared as handled have indeed been processed by the two companies.
Our concerns were shared by representatives of Bulgaria’s two animal incineration plants in Varna and Shumen.

Between August 2016 and August 2017, Ekarisaj – Varna EOOD serviced 13 districts in Bulgaria and handled on average 400 tons per month, said Georgi Nedev, chief economist in the company, which has the capacity to process an average of 60 tons of animal waste per day. During one of the largest outbreaks of bluetongue in Bulgaria, in August and September 2014, the company serviced ten districts and processed on average 600 tons per month.

A representative of Bramas 96 AD said that in 2017 that company processed on average 309 tons per month, servicing 15 districts. The company has the capacity to handle 122 tons in 24 hours. 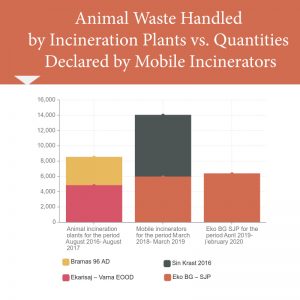 It is only logical to ask how companies with much smaller capacity compared to that of the incineration plants could have handled the amounts declared to BFSA. Another question that follows is whether the BFSA acted effectively in handling several veterinary diseases – small ruminants plague, African swine fever, and avian influenza – which had been outlined as the reason for signing annexes to the contracts with the mobile incineration firms. At the same time, BFSA data shows that Eko BG – SJP and Sin Krast 2016 were not tasked with handling animal corpses and other types of waste, generated because of these diseases. The BFSA said that this kind of waste had been buried – a strange choice, considering the signed contracts for handling of infected animals, worth tens of millions.

ACF would also like to highlight important provisions of Bulgaria’s environmental and veterinary services legislation according to which mobile incineration installations should be registered in district food safety agencies and in a common public register. As of February 2018, this register should be publicly available on the website of the BFSA. In addition, mobile incineration units are supposed to be subject to strict regulation and monitoring in a bid to reduce harmful emissions and to minimize the risk of polluting groundwater sources, soils and the atmosphere.