ACF organized a seminar in support of independent journalism in Bulgaria 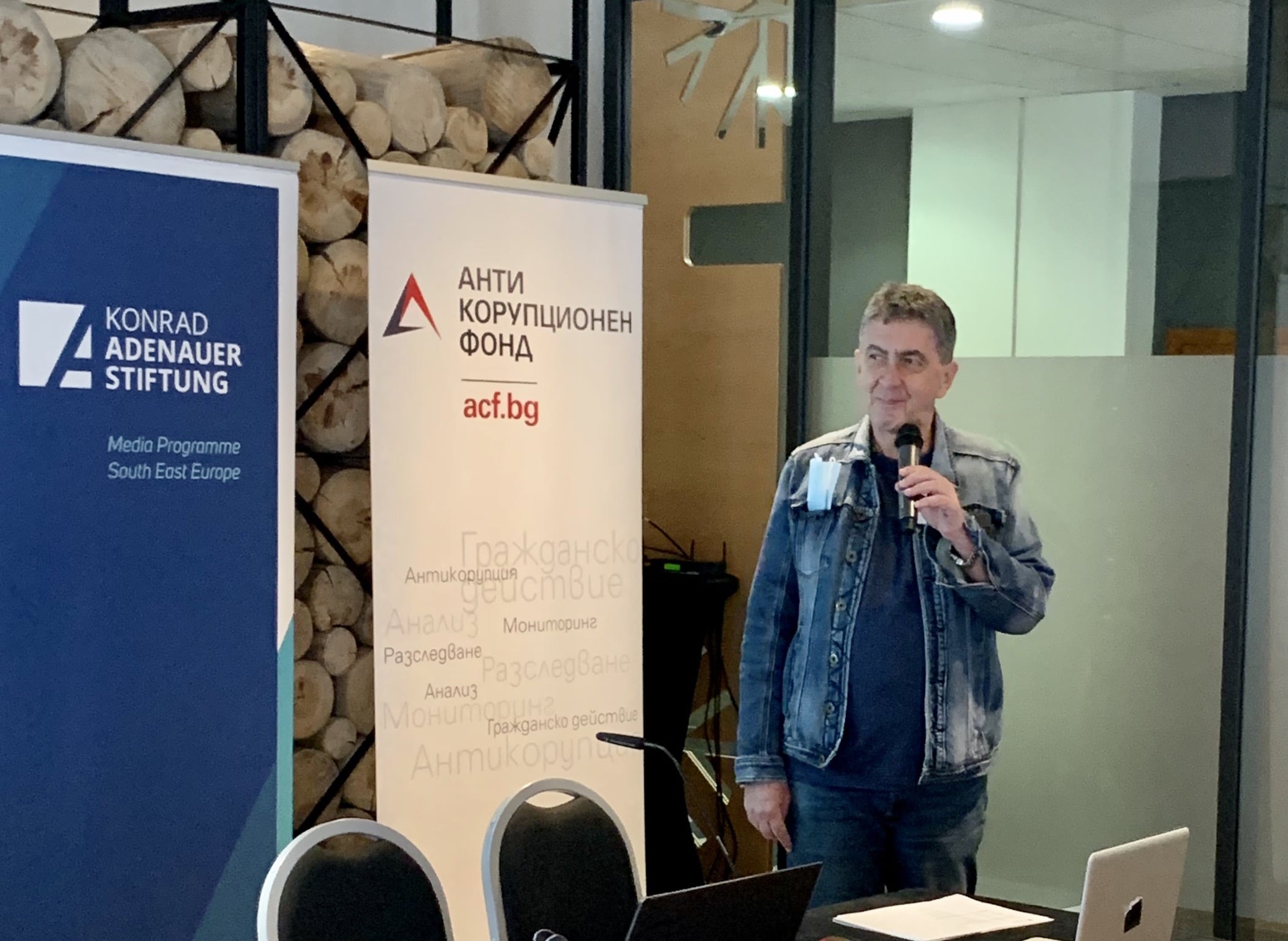 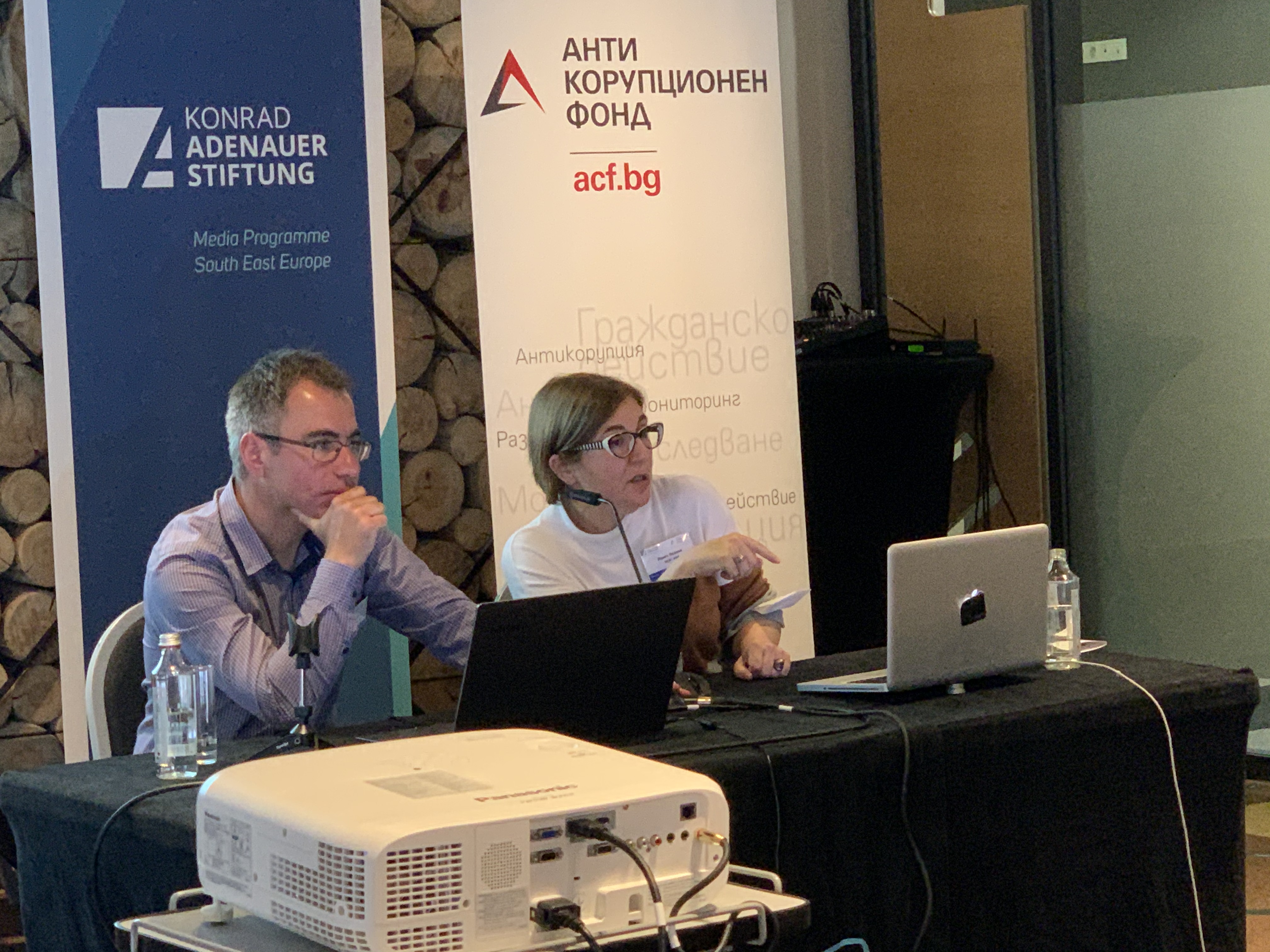 Irina Nedeva and Ivan Radev from the Association of European Journalists presented the Association’s experience in defending independent journalists under pressure. They also focused on possible approaches to strengthening solidarity and cooperation between independent journalists, the experience of the first journalists’ associations after 1989, and examples of viable organizing from other countries. The question was raised whether journalists from different media outlets in Bulgaria can unionize to protect their labor interests and the editorial independence of their publications. Or whether the cooperation between journalists should focus primarily on mutual support in cases of pressure, mutual promotion of investigations and materials, and providing publicity as the best protection against attacks. 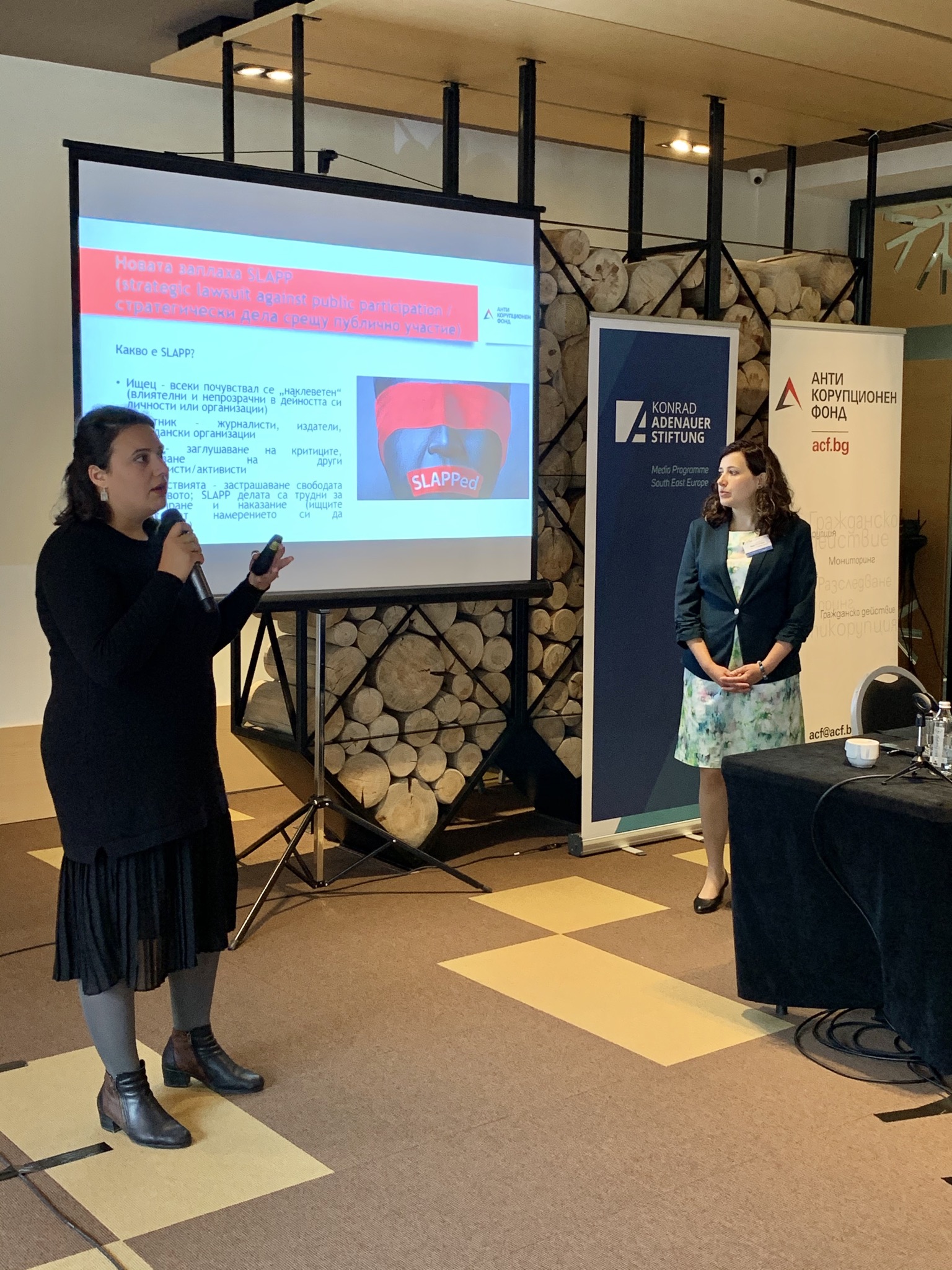 Lora Georgieva and Sofia Zheleva from the Anti-Corruption Fund’s legal program presented the legal framework in Bulgarian and European legislation, the opportunities and gaps in ensuring adequate protection of independent journalists. They outlined the growing trend of SLAPP cases being used to silence journalists and the measures taken at the national and European levels.

Georgi Savchev from OFFNews.bg and Ilian Vassilev, Chairman of the Board of the Alternatives and Analyses Foundation, producer of “The Alternative,” presented the financial models of their media and the place that new technologies and social networks for crowdfunding occupy in them. In addition, a discussion outlined the opportunities and limitations of the alternative financial models and the extent to which they provide an option for avoiding financial censorship, one of the most common restrictions on freedom of speech. 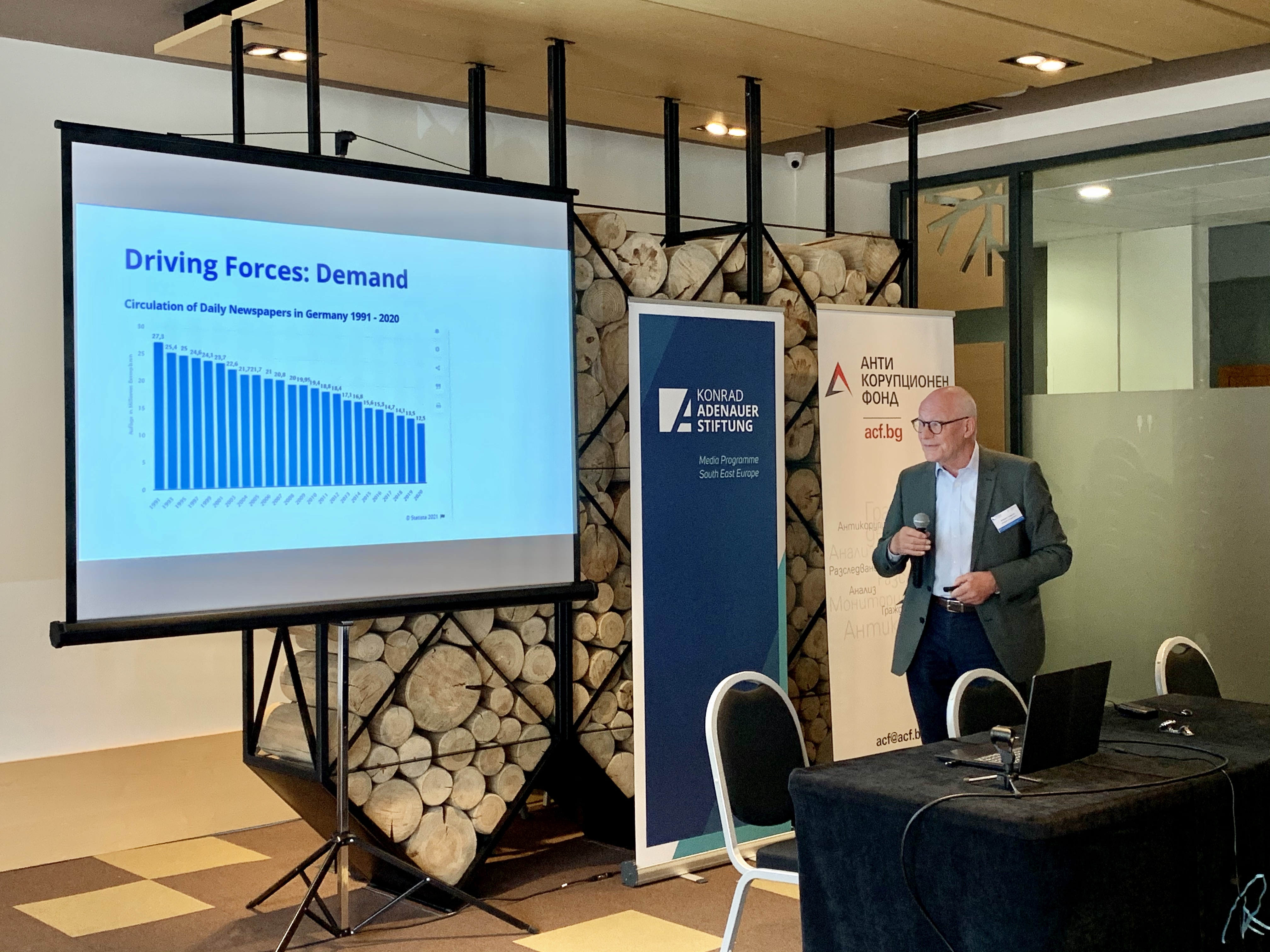 Michael Geffken, former director of the Leipzig School of Media Education Centre, presented an analysis of the working points and shortcomings of the German model of journalistic independence. Despite better conditions for independent journalists, he argued that the German media environment is also experiencing negative trends – loss of audiences, shrinking market, and a reduction in media diversity. Maintaining good working conditions results from constant struggle and cooperation among independent journalists in the country, the German speaker summarized. 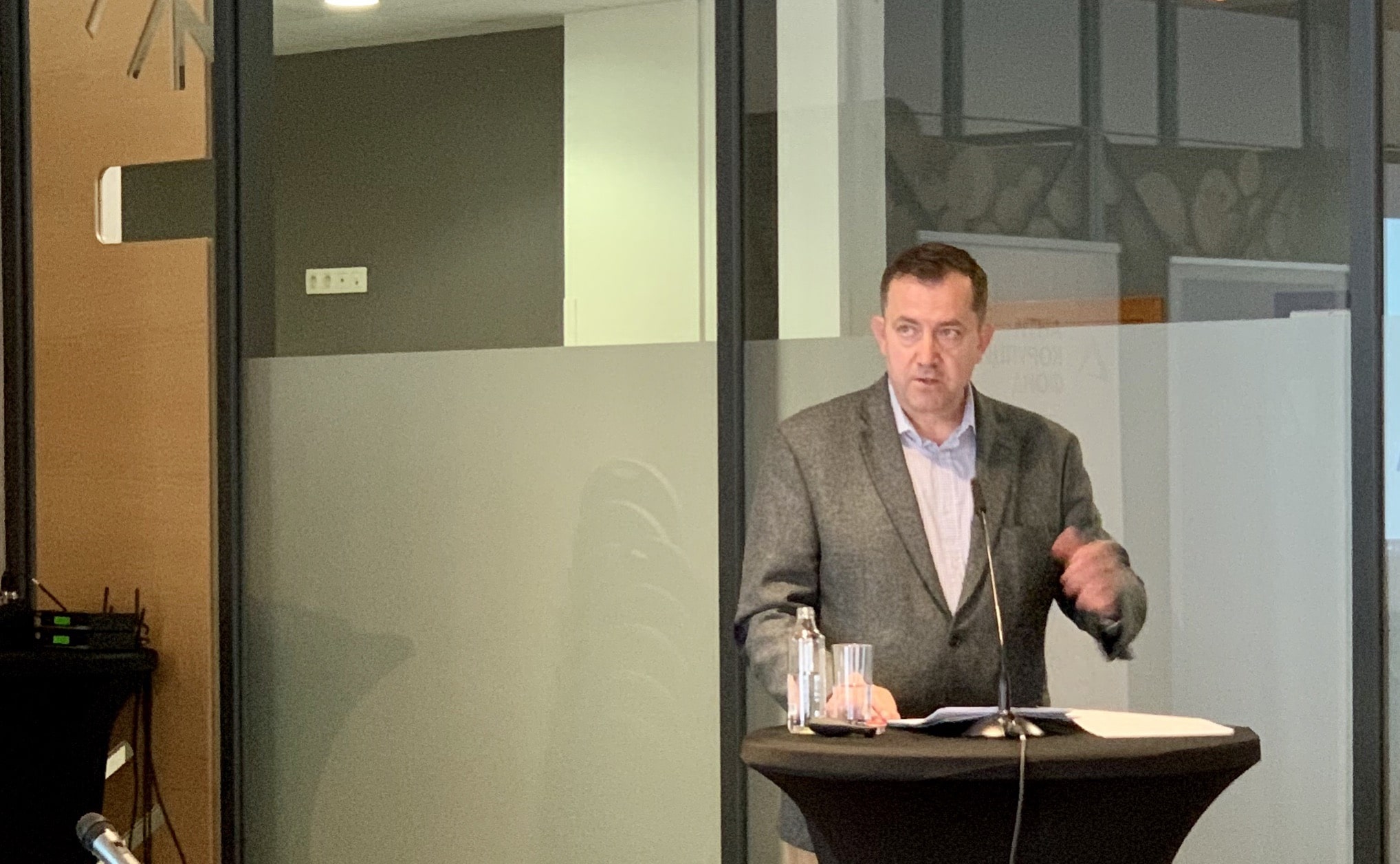 Ognian Zlatev, Head of the European Commission Representation in Zagreb, outlined the growing commitment of the European institutions to independent journalism. The European institutions monitor the situation with the journalistic independence in the member states very closely. They are determined to do their utmost to counter political and economic pressure on them. However, it remains to be seen whether support for journalistic independence will take the form of a European directive with binding requirements or a recommendation to national governments.

Analysis of the ACF: GERB and the Movements for Rights and freedom win the biggest share of votes in polling stations at risk

ACF: BFSA violated the law by concluding a lease agreement with Eurolab 2011

Stefan Avramov has got most preferences in these elections as well

ACF stands in solidarity with the Association of European Journalists - Bulgaria and strongly condemns the actions of the authorities against the journalist Maria Tsentsarova.

ACF on the decision of the Anti-Corruption Commission on Slavi Trifonov: Institutions again encourage politicians to break the law

The others for us

Purchased and controlled vote and trust in the electoral process

Andrey Yankulov to Fakti: The work of the Anti-Corruption Commission is shrouded in secrecy

Mario Rusinov on election technology and the purchased vote

Der Standard: As early as 2019, ACF has sent reports to the Financial Inspectorate and the Prosecutor's Office about irregularities at the Capitan Andreevo Check Point

Andrey Yankulov: It is strange that a deputy minister was dismissed after allegations of a BGN 200 000 bribe, and now he has been restored to the same position

Andrey Yankulov: The draft law about the Anti-Corruption Commission allows for external control over the Prosecutor's Office

Trading votes for firewood, or about the election frauds in the upcoming elections

Why do banks in Bulgaria go bankrupt? The Strasbourg Court ruling and the lessons unlearned

Analysis of the ACF: GERB and the Movements for Rights and freedom win the biggest share of votes in polling stations at risk

Is the Asparuhovo Bridge dangerous?

The Public Financial Inspection Agency: In Search of the Missing Capacity